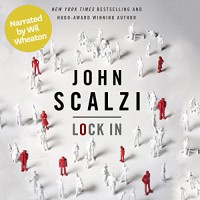 Fifteen years from now, a new virus sweeps the globe. 95% of those afflicted experience nothing worse than fever and headaches. Four percent suffer acute meningitis, creating the largest medical crisis in history. And one percent find themselves “locked in”—fully awake and aware, but unable to move or respond to stimulus.

One per cent doesn't seem like a lot. But in the United States, that's 1.7 million people “locked in”...including the President's wife and daughter.

Spurred by grief and the sheer magnitude of the suffering, America undertakes a massive scientific initiative. Nothing can restore the ability to control their own bodies to the locked in. But then two new technologies emerge. One is a virtual-reality environment, “The Agora,” in which the locked-in can interact with other humans, both locked-in and not. The other is the discovery that a few rare individuals have brains that are receptive to being controlled by others, meaning that from time to time, those who are locked in can “ride” these people and use their bodies as if they were their own.

This skill is quickly regulated, licensed, bonded, and controlled. Nothing can go wrong. Certainly nobody would be tempted to misuse it, for murder, for political power, or worse.

In Lock In you get a combination of sci-fi and police procedural.  The future setting feels real and other than the technology is not so different from today.  We follow Agent Shane, who grew up as a poster child for Hayden’s Syndrome and is trying to leave that behind him, on his first day of work for the FBI which also happens to be a the first day of the Haden Walkout in protest of legislation that is going to go into effect taking away much of the government funding/benefits to people with Hayden’s.  Agent Shane is paired up with the jaded and rough around the edges Agent Van, she used to be an Integrator for people with Hayden’s, so they each have a fairly unique understanding of each other, even as they get to know each other as partners.  Shane’s first real day on the job starts with a murder that involves and Integrator and we get to watch the story unfold as clues are provided.  Some of the plot was predictable and some of it very easy to figure out, ultimately it was a very tangled web weaved by the time the “bad guy” is revealed.  While the story is wrapped up nice and neat at the end, there is still a possibility of another story for a new investigation.  I hope we do see more as the characters were fun and would love to read more.

This was my first Audiobook narrated by Wil Wheaton, I thought he did a great job and I plan on looking for more books narrated by him.  While he did not change his voice much for the different characters, I found I did not have a problem following which character was speaking.  I prefer to hear a narrator do this rather than give a voice that does not fit the character, which I find can ruin a good audio.  The novella at the end has several different narrators, off hand I recognized Luke Daniels, Tavia Gilbert, and Therese Plummer…, the novella was interesting and helped answer questions I had while listening to Lock In, I like how it is done documentary style.

All in all this was a good story; good narration and I look forward to reading/listening to more by John Scalzi

Audiobook was provided by and reviewed for www.audiobookreviewer.com